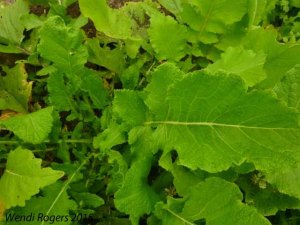 turnip leaves in the garden

“The [two Knightley] brothers talked of their own concerns and pursuits, but principally of those of the elder [George], whose temper was by much the most communicative, and who was always the greater talker. As a magistrate, he [George] had generally some point of law to consult John about, or, at least, some curious anecdote to give; and as a farmer, as keeping in hand the home-farm at Donwell, he had to tell what every field was to bear next year, and to give all such local information as could not fail of being interesting to a brother whose home it had equally been the longest part of his life, and whose attachments were strong. The plan of a drain, the change of a fence, the felling of a tree, and the destination of every acre for wheat, turnips, or spring corn, was entered into with as much equality of interest by John, as his cooler manners rendered possible; and if his willing brother ever left him any thing to inquire about, his inquiries even approached a tone of eagerness.” —  from Emma (1815), Chapter 12, Jane Austen

Turnips discussed in Jane Austen’s Emma (1815) were planted as a forage crop for cattle and swine. In the early 19th century when Austen published, the Knightley brothers would have been recognized as progressive, gentlemen farmers who fretted over then modern agricultural practices of field and pasture drainage and crop rotation. Perhaps several turnip roots were harvested as a tenet farmer and his cousin living in gentile poverty left the field for family dinner. Historically, cornmeal, turnips, and their greens were understood to be what you fed livestock, and the foodstuff of people living in poverty. Depending on where and what Western subculture you lived in, you would eat the greens and feed the roots to the hogs, or eat the roots and feed the greens to the livestock. I grew up with stories of my small town Kansas hometown where the only crop that kept people from starving in the early 1930s were the turnips and handfuls of other root vegetables that survived the early 1930s drought by the hand watering of anxious gardeners.

It was not until college it ever occurred to me to eat the greens of a turnip. Turnip greens were bitter but when mixed with other “greens” and cooked to the point they had just wilted, then prepared with a light but spicy sauce the turnip greens and its cousins were tasty. Eating turnip greens also satisfies the “waste not, want not” paradigm I drag behind me like an albatross I have not yet released to the universe.  For some, “greens” are a comfort food, and for others eating “greens” is a political statement. Last week I needed to thin the turnip row in the garden, and hated to see the turnip leaves compost when we could eat the green leafy foliage.

The Mixed-Greens and Sausage Soup with Cornmeal Dumplings was an easy recipe to prepare. I prepared the exactly 18 measuring tablespoon (15 mL) sized dumplings and allowed to sit in the refrigerator for about 2.5 hours. The green onions were the green tops from three onions I pulled from the garden. The onion used in the soup was fresh from the garden. Everything about the soup was straight forward. I did not salt or pepper the soup because I thought the sausage would provide enough salt and pepper to flavor the soup. I used a smoked beef sausage instead of the called for andouille sausage because the grocery store and meat market did not have any that day. I used ½ teaspoon (2.5 mL) hot pepper sauce instead of the called for 1 teaspoon (5 mL) with the idea if I wanted the soup more spicy, I could add a drop or five later at the table. I weighed out 6 oz. (168 g) of washed turnip greens fresh from the garden, which is all I had after thinning the turnip row, and 6 oz. (168 g) kale from the grocery store. The visual different of the seaweed-like turnip greens and curly, tight kale leaves provided a visual and textural interest to the soup. I cooked the dumplings for 25 minutes in the large soup pot containing the soup. It is important to not lift the lid while the dumplings steam cook; let the dumplings steam in peace. The recipe produced 10 cups of hearty soup.

I liked the cornmeal dumplings. The dumpling texture was light and resembled a fluffy pastry, not the doughy gunk I have encountered in previous dumpling recipe attempts. The dumplings almost dissolved when the soup was reheated, which was disappointing. I do not expect the dumplings to survive freezing intact. The dumplings thickened the soup to the point I had to add the leftover 2 cups (500 mL) chicken broth to keep the soup in soup form. Next time, I will store the dumplings separate from the soup. Perhaps storing separately will maintain the integrity of the delightful little bread.

This is a tasty, garden-fresh, summer soup I will make again.

Here is the link to the recipe: